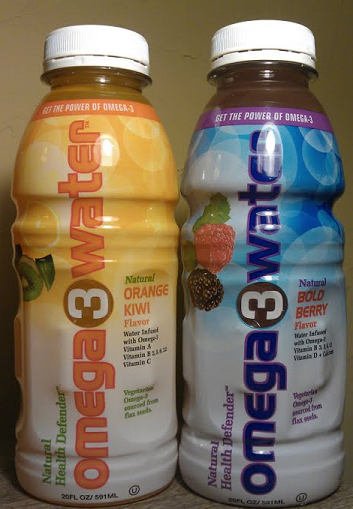 Have you heard how healthy Omega 3 is for you? I had always heard it has some great health benefits, such as Heart Health,Depression and Stress and much more. I have tried a few products and have not liked them. The either have a bad smell or they taste like fish! I personally do not care for fish!

I was sent a product called Omega 3 Water to try. There are lots of life/vitamin waters out there but this one has all the Omega 3 that you need in it. They are available in two flavors, Berry and and Orange Kiwi. They sent me both flavors to try. It comes in a plastic 20oz bottle with a wide mouth. These are both vegan and Kosher friendly.

I thought that the berry one was not that good. It had a strange taste to it. I guess it was just something very different. Now on the other hand I LOVED the Orange Kiwi! It has a slight hint of sweetens to it but not to much. The Orange and Kiwi are just the right mixture, I think. One does not over power the other. I tried them both at room temperature and cold. The orange was good both ways but the berry was definitely much better cold. It is so nice to be able to get the Omega 3 that helps improve your health and has a great taste too!

I tried it on its own but I have some other ides I want to try. I was thinking that you could freeze it into ice cubes and then add them to a drink. I was also thinking it would work great in a mixed drink! You could use it to replace mixes or juice. That way you will have some health benefit to you drink. Now I don’t think that is the health benefits they had planned on but I am just saying it would be another thing you could do with it.

If you would like to buy some to try, they are only found at stores in five states VA, NC, SC, TN & GA. You can also order Omega 3 Water on their site. You can always try and win some! We will be having a giveaway November 10th – 18th. So be sure to come back to enter for your chance to win!